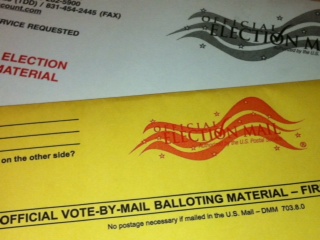 Some welcome numbers on vote by mail have been projected for the 2022 midterms. According to David Meyers at the Fulcrum, the “number of people who vote by mail is expected to grow by 40 percent from the last midterm election and could nearly match 2020 totals.”

In the 2020 general election, thanks to nationwide pandemic policies, 66.5 million Americans voted by mail. If we match those numbers in 2022 – which would be a feat, considering turnout is much lower at midterm elections – then we’ll know “voting by mailed-out ballot has gone ‘mainstream’ beyond the few initial states [out west].”

Washington, Oregon, and Colorado – the three states that pioneered vote-by-mail (VBM) by sending all registered voters a ballot in the mail – have all enjoyed high rates of return on VBM ballots, and high overall turnout, to boot. But what’s interesting about post-2020 data is that “the highest rate of return, so far this year, can be found in the 21 states that do not proactively send ballots to all voters but also do not require people who request a mail-in (or “absentee”) ballot to provide an excuse.”  Indeed, the National Vote at Home Institute “estimates that 10.2 million of the 12 million requested ballots (85%) will be returned.”

Voting by mail, or absentee voting from home, is as popular as it is because it makes participation easier. And Americans like having this option. According to the Pew Research Center, 65% of voters favor access to no-excuse absentee voting, meaning you could cast a ballot from home even if nothing was physically preventing you from getting to the polling place. At US Vote, we learned through our 2020 post-election survey that the vast majority of voters – domestic (95%), overseas (85%), and military (90%) – were “satisfied” or “very satisfied” with their absentee voting experience.

Because voters report such favorable experiences with absentee voting, we kicked off a 2022 campaign called “Absentee Voting is Voting.” For this practice to catch on nationwide, it’s essential we dispel any disinformation on the topic. The fact is, absentee voting is safe, secure, and turnout-boosting. It’s another fair way to cast a ballot.

As of now 16 states still require voters to provide a qualifying excuse, like hospitalization or working outside the county, before obtaining an absentee ballot. When all states catch up to those offering no-excuse absentee voting – or vote by mail, through mailing all voters ballots – then absentee voting numbers are sure to rise. And so will turnout, as our pioneering states out west have shown us.

We’re only a week out from midterm elections. Many Americans have already voted early in-person, requested an absentee ballot, or even deposited it at a secure drop box. If you’ve haven’t yet requested your absentee ballot – and want to – you might still be able to obtain one from your local election official’s office (and vote right there).  Check your state’s absentee ballot request and return deadlines to see if you can still vote absentee!

Refer to US Vote’s Ballot Return Options chart as to whether you can also return a completed ballot at a drop box, election office, polling place, or vote center. In most states, you have options for ballot drop off. Just be sure to check any notary/witness signature requirements, and follow the instructions on your ballot.

Lastly, check out our absentee voting explainer for everything you need to know on the topic. The more you know, the more you’re empowered to successfully vote a ballot that will be counted. Because, as we envision for the country, every citizen is a voter!