Voter Registration in the United States

In all states but one*, you must first register with a local, county, or state office before voting in an election.

As a registered voter, elections offices will generally notify you of upcoming elections – including polling place locations and deadlines to cast a ballot – and candidates running for office will start considering you as a potential constituent, reaching out to seek your opinion and your vote. Voter registration is a civic responsibility, but it’s also a way to ensure your voice gets heard by our elected representatives.

Who Can Register to Vote

You must be a United States citizen aged eighteen or older to register and vote. While the federal government, under the elections clause of the constitution, can regulate elections more generally, states enjoy a lot of authority to set additional qualifications for voters.

That’s why some states require you to be a resident for a minimum of 30 days before voting and/ or register by a certain deadline between 0 and 30 days before an election. In some states, you can vote from prison, while in others you’re prohibited from casting a ballot until you’ve completed parole or received a pardon from the governor. Whatever your circumstance, check your state’s eligibility requirements – and then get registered.

How and Where to Register

Voter registration has been made increasingly accessible over the years. In 1994, with the aim of boosting national voter registration rates, Congress passed the National Voter Registration Act (NVRA), requiring all states that did not offer same day registration, to provide voter registration at local DMVs, public assistance offices, and other state-designated agencies, like libraries, universities, or gun license offices.

Some states implemented the law well, boasting higher registration rates shortly after the law’s enactment. But those impressive numbers took a nosedive a decade later, when states reported a 79% drop in rates since the NVRA’s passage.  Advocacy and litigation conducted by several voting rights groups, though, helped improve compliance among handfuls of states. 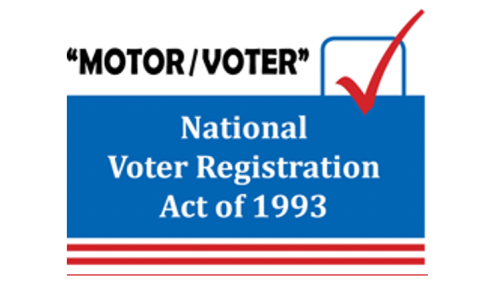 Since passage of the NVRA, many states have additionally implemented automatic voter registration (AVR), requiring state agencies – DMVs, health exchanges, or naturalization offices – to automatically register citizens upon submission of documentation determining their eligibility, unless they opt out.

Automatic voter registration has proved to be an effective way to register new voters and, additionally, reduce the registration gap between low- and high-income Americans. In 2016, after Oregon first implemented AVR in its DMV offices, turnout of those who had been automatically registered represented 43% of all those who voted. Since then, an additional 21 states and the District of Columbia have enacted the reform. 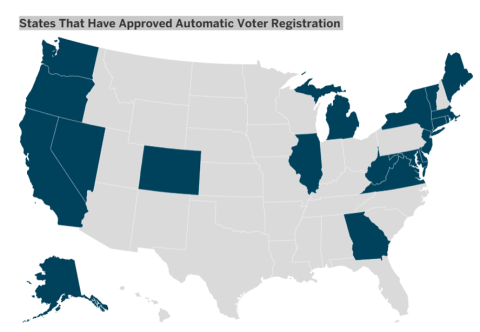 If you don’t regularly visit agency offices, you can still register to vote through your local county elections office. Either complete a form and submit it by mail or walk into the office to fill one out by hand. Contact your local election office for location and hours.

In most states, eligible citizens can also register to vote online. You will likely need a driver’s license, state-issued ID, and/or last four digits of your social security number to register online, since most states require a copy of your signature on file. When you check in to vote at your polling place, the poll worker will compare your provided signature with the one on file from your registration. Check to see if your state offers online voter registration today!

Many states require citizens to have resided within the state and submitted a voter registration form (in-person, by mail, or electronically) at least 30 days before the date of the election. Note that some states impose varying deadlines depending on the means by which you register.

Moving After the Registration Deadline

Under federal law, citizens who arrive at the polling place for a federal election, which can be combined with other state/local elections, can update their registration and vote, even if they don't do so by the state’s registration deadline.  Under the National Voter Registration Act, the voter has options:

Check your state’s regulations to see if you can vote at your new polling place, whether in the same or new jurisdiction!

Although most of us now view voter registration as a required, if annoying, prerequisite to voting, states initially imposed the requirement to suppress votes.

In the early 1800s, several states – Massachusetts, Maine, Pennsylvania, and Connecticut – instituted voter registration regulations with the aim of preventing voting by immigrant populations. The effects of such laws may have reduced turnout by close to 20 percentage points.

Registration laws, during Jim Crow, served as the basis for several other discriminatory voting practices – like poll taxes, literacy tests, and requirements to accurately guess the number of bubbles in a bar of soap – which aimed to and had the effect of restricting Black Americans from voting.

It wasn’t until 1964 that the 24th Amendment prohibiting poll taxes was ratified. But registration laws remained on state books. In that same year, over a thousand volunteers helped register Black Americans in Mississippi during “Freedom Summer,” an effort met with resistance and sometimes deadly violence by the Klu Klux Klan.

A year later, in 1965, Congress passed the Voting Rights Act (VRA), which eliminated poll taxes and literacy tests, and empowered the federal government to oversee elections practices in states with histories of discrimination. The VRA was effective: in the five years following enactment, “as many African-Americans were registered to vote in the South as had been registered in the previous 100 years.” 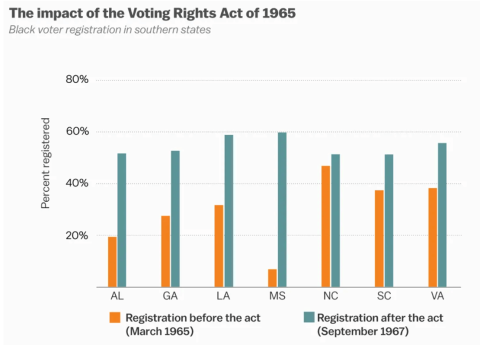 Even though registration is now considered “a given”, vote suppressors continue to use registration and other practices with the aim of or effect of preventing Americans from voting.

In 2018, for example, Georgia’s use of an “exact match” law, requiring all information from one’s registration form to exactly match that from their ID card – including hyphens in a name – disproportionately impacted minorities: 80% of those whose registrations were rejected or placed on hold were voters of color.

That same year, Trump’s Presidential Advisory Committee on Election Integrity, in a national effort to review all state’s voter registration records, specifically requested from Texas, all registrations linked to those with Hispanic surnames.  Multiple lawsuits were filed, requiring the commission to disband, but the effort nonetheless harkened back to days when registration sought to keep immigrants from voting.

Under the National Voter Registration Act, states are required to conduct regular maintenance of voter registration lists, making reasonable efforts to remove ineligible persons from the rolls due to death or change in residence outside the jurisdiction.

Such maintenance must be uniform, nondiscriminatory, and completed at least 90 days before a federal election. That way, if a voter’s record is accidentally purged, they can re-register in time for the upcoming election. Additionally, voters’ records may not be removed for the sole reason that they failed to vote.

For voter-list removals based on change of address, the state must notify the voter by a forwardable postage-prepaid, pre-addressed return card that includes space for the voter to update their address. If the voter fails to return the card, and then misses the next two federal elections, the state may remove their voter registration record.

Because states regularly update their voter registration rolls – and sometimes make mistakes! – it behooves you to regularly check your voter registration, especially a couple of months before an election. If your record can’t be found, re-register as soon as possible, but definitely by your state’s deadline.

Are voter registration purges fair? It depends on how they’re conducted.

Although we don’t have sufficient national data to know whether, or to what extent, state registration-removal practices disproportionally impact voters of color, we do know that counties with histories of discrimination, purge voters at higher rates; and in at least a couple of locations, Black voters’ records were purged at higher rates than those of whites.

More research is needed to know the full impact of these state-wide purges on voters, particularly so states can tailor them to efficiently update rolls without engaging in discrimination deemed illegal under the Voting Rights Act.

Some inter-state registration-removal programs did indeed appear to have discriminatory impacts. The Interstate Voter Registration Crosscheck Program, which originated in Kansas and was joined by 27 additional states, enabled states to exchange registration lists so that they could remove registrants who moved to one of the program’s participating states. In theory, this sounds fine.  However, the program, which required a state to match a registrant’s first, middle, and last name, birth date, and last four digits of a social security number, advised states that SSNs “might or might not match.”

Unfortunately, without additional identifying information like a current or former address, or suffixes like Jr. or Sr.; not requiring SSN matches before removing registrants all but ensured that those with Hispanic, Asian, or Black surnames would more often be removed from registration rolls, given how many citizens share a relatively small number of surnames. For example, Garcia, Lee, and Jackson are frequently used surnames in these communities. Indeed, “...one in six Hispanics, one in seven Asian-Americans, and one in nine African-Americans in Crosscheck states landed on the list” for removal.

Crosscheck has since shut down due to security failures, but the lesson remains that states must be doubly sure – through the use of several key matching data points – that they’re only removing registrants who have in fact moved out of state.

You may have read that in 2016, Russian government operatives attempted to hack 21 state voter registration databases but were largely unsuccessful in infiltrating those systems. However, they did successfully view information from 76,000 registrants in Illinois. And we’ve since learned that all 50 states had been targeted that same year by Putin for purposes of identifying vulnerabilities in our elections systems. While no votes were compromised, these attempts and hacks are nevertheless alarming.

The silver lining here is that, since 2016, the Department of Homeland Security, National Security Agency, and other federal agencies have approached anew how to address elections security. Indeed, as several national intelligence agencies determined, 2020 was the country’s most secure election to date. What’s needed now is federal legislation mandating key elections security measures, plus funding to all states for purchase of paper-trail and auditable voting machines, in addition to paper backups of registration records.

Given that registration can impede some from voting, particularly lower-income Americans, implementation of same day registration would almost certainly increase our national turnout rate. Remember that while states enjoy much freedom in setting voting rules (“the times, places and manner of holding elections for senators and representatives, shall be prescribed in each state by the legislature thereof”), our federal constitution provides that Congress “may at any time by Law make or alter such [elections-related] regulations, except as to the places of choosing senators.”   U.S. Constitution, Art. I, sec. 4.

Voter Registration in Other Countries

More than half of all countries make voter registration compulsory. Some automatically register eligible voters, while others legally stipulate that qualified residents must take steps to register themselves.

The Myth about Voter Registration and Jury Duty

Most state and federal courts identify potential jurors from state tax records, driver’s license information, and voter registration rolls. Don’t give up your chance to vote just to avoid jury duty – because chances are you’ll get called anyway! Plus, jury duty – like voting – is another chance to flex your civic responsibility muscle.