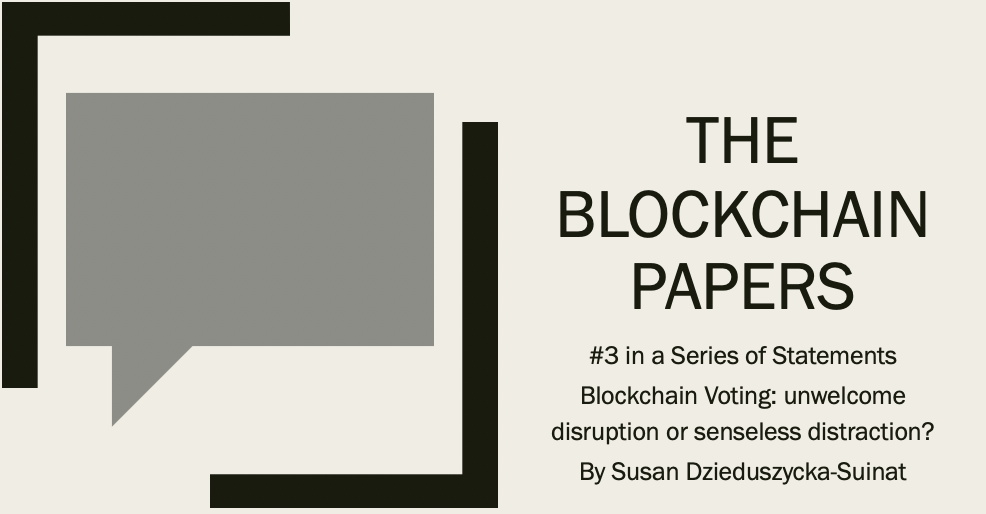 It really gets old being a guinea pig. Not because of the cagey confines, but for the insistence of those who try their ideas out on you. Overseas and military voters continue to be the guinea pigs for unvetted online voting ideas, the new one being “blockchain voting”. We have been here before.

Overseas and military voters do need continued meaningful reforms across all states, and it is good when people truly care enough to examine and invest in solutions. What we do not need is a distraction that introduces new threats to overseas and military ballot integrity. The cliché “disruption model” doesn’t belong in our elections. Particularly in light of Russia’s cyber-interference in elections in Ukraine in 2014 and the US in 2016, we should consider with extra caution the idea of putting the entire voting process online. Russia itself is pushing to use this same technology for voting. Maybe it is worth a deeper look at it before we rush to its implementation? Perhaps investment in a threat detection system, which most state election offices cannot yet afford, would, at minimum, be a wise first course of action.

Typically election systems must undergo formal testing and certification. Public access and examination is crucial. With a fully online system, that requirement is far more serious. Internet voting is not the same sort of simple transaction as is online banking; it is far more complex due to the fact that there must be a separation of the transaction from the identity of the person executing it. Just because there is a “blockchain” for the transaction doesn’t make the total voting system secure.

The bottom line: it should not be possible to implement these systems in real elections without full and complete public examination. It is not sufficient to declare a technology as “tested” when it is used only in private elections and by outside companies hired to do “security audits”.

Hence the dismay at the most recent efforts by Bradley Tusk and his chosen vendor, Voatz, to influence the injection  of uncertified blockchain technology into overseas and military voting. We know how hard it is to resist the promotion that this is a panacea for voter turnout and access. There are real problems that need real attention. So when an attractive, wealthy individual  arrives in an under-resourced election community with a shiny new “disruptive technology” (cue the keywords) and a sleek PR machine, who can blame anyone for not opening the door at least a crack. But maybe, we should try to resist flinging that door wide open for the few, to the detriment of the many.

Compared to the hype of blockchain voting, constructive policy change might be less exciting, but it is far more effective. There are efficient ways we could improve overseas and military absentee voting across all states right now, without “disruption”. Rather than sprinkling highly-questionable, proprietary, uncertified technologies across a few states, (which will make no difference whatsoever for the other millions of voters), we should focus on what will truly improve the process for millions. And we can.

This is not an argument against technology in the voting process: rather, it is for an appropriate use of technology in voting. Here’s what could make a real difference in participation, ease of voting and administration:

The single FWAB transmission option would replace the multiple transmissions of voter registration + ballot request + ballot delivery + ballot return with a single, one-time transmission of the required ballot application together with the voted ballot. Introducing a vastly simplified process for voting from overseas like this, together with a widespread announcement of an official early voting period for overseas and military voters would give a real opportunity for a long-awaited boost in turnout.

Let’s go to work on what will really make a difference and introduce more integrity into our elections. Fixing cumbersome practices may not be as exciting as a “disruption”, but fixing known problems will make voting easier for millions of overseas citizens and military voters.

[See more: Time for Act II of the MOVE Act]