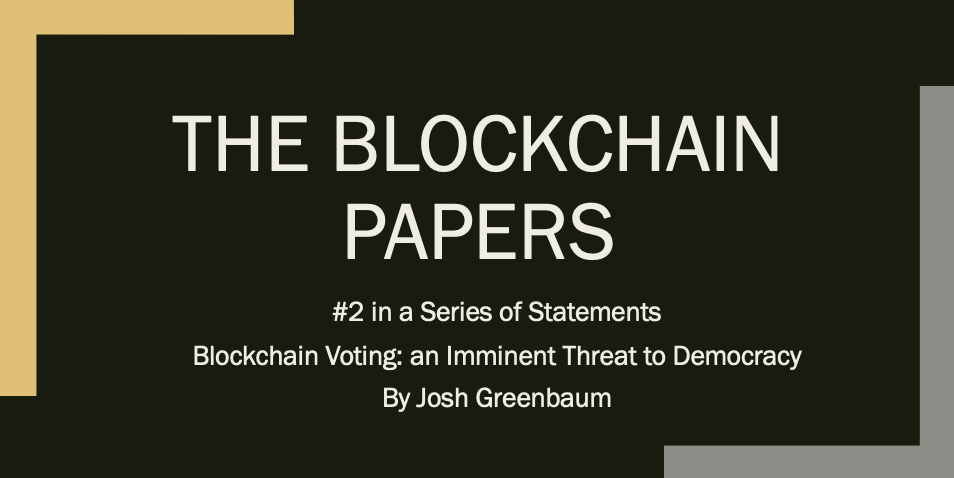 So-called “blockchain voting” systems are exceedingly risky and vulnerable to a host of dangerous cybersecurity attacks. The growing hype around the implementation of this technology in elections is a distraction from fundamental election issues that beg for common sense solutions and resources to improve US election systems. Instead of working to solve this existing landscape of issues surrounding secure, verifiable, and auditable voting for all citizens, private companies and individuals are hyping an unknown and unproven technology that is more of a grifter’s dream than anything that could truly alleviate the many roadblocks that exist in our electoral systems.

The threats inherent in blockchain-based voting systems include:

The insidious nature of blockchain voting doesn’t just end with the possibility for systematic commission of vote fraud. Importantly, many of the potential attacks that could result from the deployment of blockchain-based voting are virtually undetectable and, for the most part, none of the damage done by such attacks would be correctable after the fact. These attacks can be perpetrated remotely by anyone in the world, including domestic partisans, international criminal organizations, and the intelligence agencies of adversarial nations, many of which, like Russia, China, North Korea, and Iran, have already perpetrated election fraud on the United States.

The fact that blockchain voting could make widespread fraud undetectable means that it may never be possible to pinpoint with any precision the source of blockchain-enabled cyberattacks. This additional vulnerability ensures that blockchain voting will only exacerbate a set of problems we in the election security and integrity community are desperately striving to eliminate. It’s interesting to note that the Moscow’s regional parliament is planning to test blockchain voting techniques – should we be following the lead of a country that has made the opacity of its civic processes a “feature” of its version of democracy?

The bottom line is that, at this point in history, when voting systems nationwide are seen as under attack and in desperate need of increasing levels of support for security and privacy, the current hype around blockchain-based voting is more than a distraction. It’s a dangerous diversion of resources, time and effort towards what is fundamentally no more than a vanity project promulgated by actors whose credentials are dubious and whose motives are hard to discern. It’s time to quash this potentially dangerous effort and refocus election reform on technologies and processes that are both safer and more reliable than anything blockchain could possibly offer.

For further detail and information about the insecurity of blockchain voting, please see, The Myth of "Secure" Blockchain Voting, by David J. Jefferson.