New book about positive voting reforms: Vote for US - the People 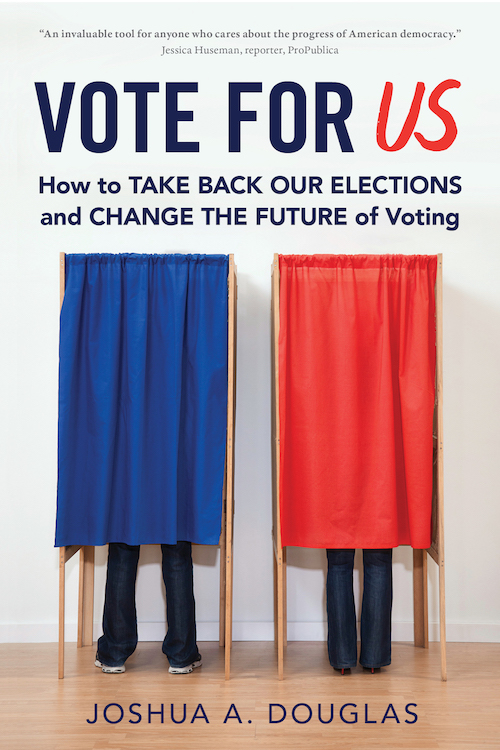 The following is the first of three guest posts by University of Kentucky Law Professor Josh Douglas about his new book, Vote for US: How to Take Back Our Elections and Change the Future of Voting:

The book is called Vote for US: How to Take Back Our Elections and Change the Future of Voting. It tells some truly inspiring stories of everyday Americans who are working in communities all over the country to fix our election system. In the process, the book advocates for various reforms to our democracy that are already seeing success in numerous local and state elections. And it highlights lot of amazing organizations that are taking on these efforts.

Today I’ll focus on a few of the people I profile in the book – the Democracy Champions in communities all over who are at the forefront of improvements to state and local democracy.

Some of these people are election officials or regular policy advocates – readers of this blog who many of you know well. But more exciting, I think, are the people I interviewed who are doing this work quietly, during nights and weekends, and without much fanfare.

For example, I open the book with the story of West Powell of Covington, Kentucky. West was 18 years old when he stole a car radio from an auto salvage yard. He was convicted of a felony, served his time, and lost his right to vote for life. Over twenty-five years later, the Kentucky legislature was considering a bill to allow some low-level felons to seek an expungement of their records. West went to testify, telling his story about how he had cleaned up his life, married, became a father to five kids, and opened his own computer repair shop.

Republican Whitney Westerfield listened to West Powell’s testimony. Westerfield was initially opposed to the felony expungement bill and told me that he thought nothing would change his mind. But something about West’s story altered his views. He immediately became a champion for the expungement bill, which eventually passed with bipartisan support.

West Powell regained his right to vote and now never misses an election.

There are tons of individual Democracy Champions just like West Powell who are working in their local communities to improve the election process, making it more inclusive and convenient. Joshua Cardenas of San Francisco, then 16 years old, advocated to lower the voting age to 16 for local elections, which came very close to passing in 2016 and likely will win enough support in the near future. Scott Doyle, a baseball loving Republican county clerk in Larimer County, Colorado, found a way to make the voting process more convenient through countywide Vote Centers. Alison Smith of Maine became a public champion for public financing. Jenifer Hitchcock, a social studies teacher in Virginia, has crafted innovative ways to engage her students in civics education.

Ultimately, this is a book of stories about inspiring Americans who are working to promote positive changes to our democracy. Fighting voter suppression is important, of course, but it can’t be the only strategy to fix our electoral system. We also must promote positive voting rights reforms. That’s what the Democracy Champions I profile in the book are all about.

Tomorrow I’ll highlight in some more detail the reforms that these inspiring individuals are championing.

Additional posts by Joshua Douglas on the Election Law Blog: