Too Young to Vote? That Doesn’t Mean You’re Too Young To Help Get Out the Vote 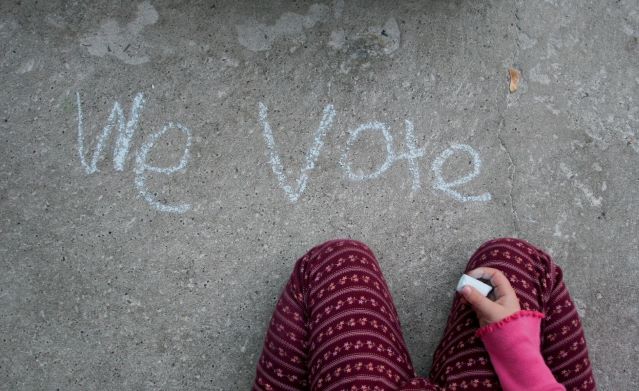 One of the true pleasures in being part of a non-partisan get-out-the-vote organization is the interest that young people show in what U.S. Vote Foundation does in order to make sure Every Citizen is a Voter. Even though our motto is technically about every eligible citizen, young people who are under the age of 18 and not eligible to vote can still have an impact on the voting process for this election and in the future.

Engaging young voters isn’t just a good idea: it’s essential to the success of our democracy. Young people lag behind other age cohorts in voting, and while the 2018 mid-terms were a watershed in youth vote turnout, the totals are still embarrassingly small: only 28 percent of all eligible voters between the age of 18-30 voted in 2018. As this age group represents approximately 35 percent of the total electorate, the largest single group of voters overall, this means that almost 10 percent of the electorate was missing action in 2018. That’s greater than the margin of victory in most major races.

So, even if you’re under 18, it’s not too early to get involved and get started on the road to actually casting a ballot when you come of age.

Here’s some ways to be involved in voting today.

One of the most important ways to help is to be a poll worker this November. In a number of states 16-year olds are eligible to work at the polls on Election Day. Assisting voters in voting is always an important job in any election. But the threat of infection from Covid-19 has meant that many of the people who typically work at the polls – particularly those who are elderly or in groups that are more vulnerable to the virus – need to stay away from the crowds during the pandemic. While there are signs that a majority of voters will vote by mail this year, the uncertainties about the reliability of the postal service may eventually end up swelling the ranks of in-person voting nonetheless.

While it’s getting quite close to November 3, there may still be time to sign up. Check with your state or county voting authorities to see what you need to do to sign up. And even if you miss the chance to help this November, there will be many more elections to come, and that means opportunities to work at the polls in the very near future.

Work on a Campaign

Young people can also participate in campaigns – leafletting and telephone banking are two activities that don’t necessarily require someone to be of voting age. Importantly, there are plenty of issues to get involved in, particularly at the local level, that actually impact young people directly: school funding, safe parks and playgrounds, safe streets, funding for recreational services, and public health and nutrition programs are just a few of the local issues that young people can get behind.

There are organized groups that advocate for various issues that you can join, or you can even create your own organization. Teens across the country have in recent years created advocacy groups around a wide range of issues in order to influence voters to change laws and policies that directly impact young people and their communities. What’s important about organizing and participating at the local level is that many of these issues are truly local issues. Policing is a good example: for the most part the decision-making around policing – budget, policy, priorities – takes place exclusively at the local level. Schools are another issue where local control is paramount. So if you feel passionate about these issues, get involved in your communities: they’ll largely be decided by local voters, and helping these voters both get to the polls and vote on the issues is an essential ingredient to change.

Nagging as a Get-Out-The-Vote Strategy

Finally, while we don’t want to advocate nagging as get-out-the-vote strategy, young people can and should try to make sure that the adults in their lives – parents, adult siblings and other relatives, even teachers – are geared up to vote. Gentle persuasion and reminders are perhaps the best. Leading by example and working at the polls or directly on an issue are also good ways to let the adults around you know how important voting is to you – and hopefully to them too. And don’t forget to talk to your friends and relatives who will be eligible in a few years to vote: getting them thinking about why they should vote and how they can get involved early on will help them see the value of voting when they’re old enough.

We at U.S. Vote Foundation believe that civic engagement at an early age is important for the future of our democracy, particularly in our otherwise increasingly polarized electorate. Indeed, the political discourse in our country could use some younger voices who can look past the ugly partisanship in our national politics and, perhaps, bring a little youthful optimism to our somewhat sordid, jaded electorate.

Democracy is never finished, and each generation has to discover it for themselves. No matter how young – or old – you are, it’s never to early or too late to get involved.

This post was inspired by an interview with one of our volunteers, Josh Greenbaum, conducted by Ryan Lo, an 11 year-old middle schooler in the San Francisco Bay area. Ryan and Josh covered a lot of issues, from the mission of U.S. Vote Foundation, voting and voter suppression, and how young people can get engaged. The interview was conducted as part of Ryan’s on-going “A Change is a Change” podcast, in which Ryan interviews different experts on important issues of the day. You can listen to the full podcast here.