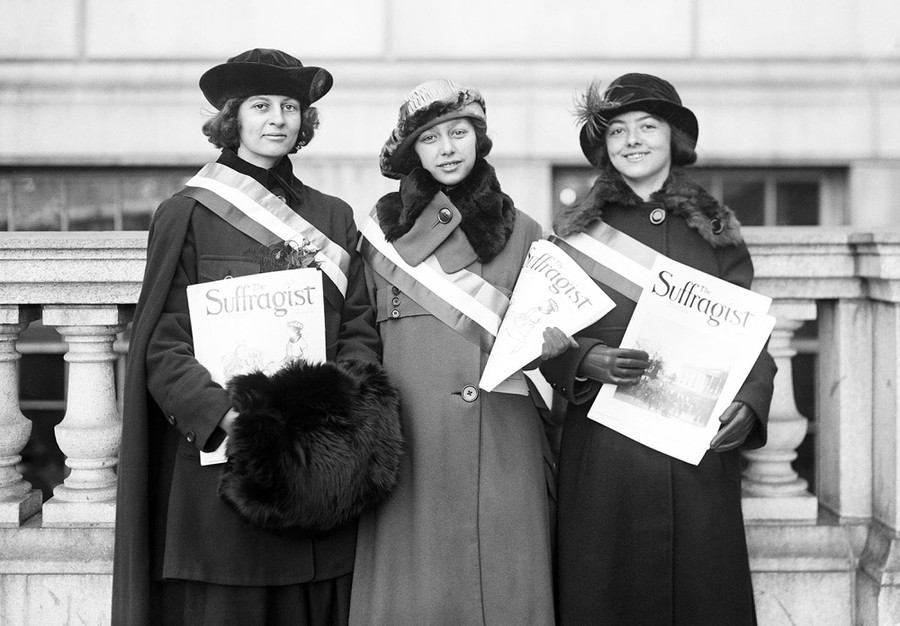 With the 100th anniversary of the passage of the 19th Amendment to the Constitution upon us, it’s worthwhile taking a look at what led to that historic moment a century ago. While 1920 marked the first election in which women could vote for president, it was hardly the first time that women were “allowed” to vote in the United States. The saga of the journey from colonial disenfranchisement to the ratification of the 19th Amendment to the modern era is a journey into the complicated history of voting in the United States, one that has oscillated between inclusion and exclusion since the dawn of our democracy.

One of the first women to vote in the United States, according to historian Stephen Ambrose, was Sacagawea, the young Shoshone woman who helped lead the Lewis and Clark expedition from the Central Plains to the mouth of the Columbia River. At a key moment in their journey in 1805, a decision to proceed by one route or the other was decided by a voice vote of the entire Corps of Discovery, including Sacagawea as well as York, William Clark’s slave. As both were technically slaves (Sacagawea had been kidnapped and “married’ to a French trader at the age of 15 after her original owner lost her in a card game), the significance of this vote is not to be denied, however little it actually influenced voting rights back home.

Women also voted sporadically in the colonies, as well as in various states during the course of the 19th and early 20th century. But the cards were definitely stacked against any notion of allowing women to vote in any systematic way, especially at the national level. The 15th amendment, ratified in 1870, which nominally allowed former slaves to vote, pointedly did not include the right for Black women to vote. Regardless, that amendment was effectively scuppered by the violence and voter suppression that characterized the Jim Crow laws and practices that evolved as a reaction to the relative freedom of Reconstruction. It took the Voting Rights Act of 1965 to begin to redress a century of deliberate suppression of Black votes that took place despite a constitutionally guaranteed right to vote.

Early suffragists took to voting illegally in an attempt to highlight the absurdity of laws restricting them from exercising their rights as citizens to vote. In 1872 Susan B. Anthony and over a dozen other activists voted in that year’s presidential election. For their temerity they were arrested, sentenced in a show trial, and thrown into jail. As Michael Waldman writes in his aptly named history of voting, The Fight to Vote¸ that trial was quickly followed by a Supreme Court decision in 1873 that ruled that the 14th Amendment in no way guaranteed anyone the right to vote. That decision, Waldman says, was cited up until the 1960s as a precedent for denying minorities, immigrants, and others the right to vote.

Even in the midst of World War I, when women actively joined the workforce to help the war effort in addition to active service on the frontlines as nurses and ambulance drivers – once again proving their value as equal citizens deserving equal rights –  the answer was still no. But the tide was turning. With almost twice as many women directly involved with the war effort as there were men, President Woodrow Wilson belatedly acknowledged their role and with it their right to full citizenship: voting rights for women are ”vitally essential to the successful prosecution of the great war of humanity in which we are engaged,” he told the US Senate in 1918. The die was cast, and the 19th Amendment would eventually be passed when the 36th state, Tennessee, ratified the amendment by a single vote two years later.

It’s been a long and at times sordid journey to this important anniversary. And a messy one too: despite its lofty goals, the suffragist movement in the early 20th century was split as to how hard it should push to include Black women in the movement. It’s an unfortunate legacy of the movement that pioneering journalist and activist Ida B. Wells was among the Black women at times vilified by the suffragist movement for insisting that the franchise be extended beyond the movement’s majority white base.

So as we look back on the last 100 years, it’s safe to say that this special moment in history, when a woman is representing a major political party at the top of the ticket for only the fourth time in history, didn’t happen easily. It took hard work, sacrifice, and an unfortunate tendency to backpeddle and retrench before moving forward once again.

This is why we at U.S. Vote Foundation and the Overseas Vote work so hard to make sure our creed Every Citizen is a Voter is a reality in every election, local, state, or Federal, in a presidential election year such as 2020 as well as in the off years. These rights were won the hard way, through active participation in civic life, protest, hard work, and dedication to the ideals that our country was founded on. Keeping them for the next 100 years means more of the same – voting rights need constant defense, and the best way to ensure these rights are available to our children and children’s children is to vote.

So what are you waiting for?