Round Two: a visually-impaired voter tells her latest story 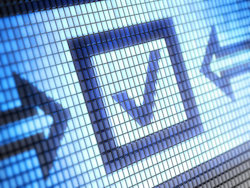 by Pauline Ugalde - Second in a Series

Reflecting on the 2018 mid-term elections, I decided to write about how I felt my experience as a visually-impaired voter impacted my voting rights. Furthermore, how it complicated what should be a simple process, what my observations were, what feedback I could give, and finally, to compare it to the process of voting in the 2016 elections.

As in the last election, I traveled to my closest voting precinct to vote instead of voting by mail. I was optimistic about the prospect of using the audio-based voting machines. I hoped that they had been improved since 2016, or even better, replaced with machines that use the same accessibility technology that visually-impaired people use in their daily lives. Unfortunately, that was not the case.

The machines provided were exactly the same as two years ago; they had not been updated in any way. However, fortunately, unlike two years ago they were no longer located in the middle of the room, they were instead partially closed off from the rest of the precinct in a small room adjacent to the lobby area.

For those unfamiliar with the audio-based voting machines, the results of the user’s vote are stored on a plastic card, which is only ejected after the voting process is over. This is the part that I found the most complicated. When it was time to insert the provided card, the machine said it was invalid. Technical support was called so that the poll workers were able to restart the machine, eject the faulty card and insert a brand-new card. The result was the same on the second and third try: invalid.

Eventually the card reader on the voting machine was diagnosed as broken and I had to resort to using a paper ballot, where my mother had to read the contents of the ballot out loud and select my answers. (Now you know what a great mom I have. That said, I did not want to vote that way. I wanted to vote on my own.)

On the two nights leading up to the election, I wrote down my choices to speed up the voting process at the polling station. In spite of my preparations, I felt disoriented because I had assumed that I would be using an audio-based voting machine. I have always been taught that voting was supposed to be anonymous and secret, so it felt wrong that I essentially had to cast my ballot through another person and in a public place. Tt felt like an infringement on my privacy.

Just like during the 2016 presidential election, I felt cheated.

However, there was a silver lining to in my experience. I now understand the difficulties regarding security in voting systems. As convenient as it would be to cast votes using common screen-reading software on normal computers, they would be vulnerable to hacking. Polling place employees would have to be trained in how the screen-reading software works, as well as any voting systems that are installed on them. This is a tall order to expect from volunteers. Under the current system, because the contents of a voter’s ballot are restricted to a card, the only way to duplicate their vote or alter their choices would be to gain access to the data on that card.

Furthermore, a person should not be required to master a completely new piece of hardware just to vote, e.g. the controller for the audio-based voting machine. Either design a controller that is similar to something visually-impaired people already use, like a phone keypad, or let them practice using the device before it is plugged into the machine, before the voting process even begins.

Further, as a last resort, have braille copies of the ballot on hand. Design them in such a way that the people tabulating the results do not have to know how to read braille to count the results and or accurately record them electronically. If none of this is feasible, at the very least, poll workers should test the machines before the polls open, so any problems can be fixed before a person with a disability comes and asks to use it.

Overall, I feel I should not have to point out these problems and the lack of improvement to accessibility, and yet, here I am. As I stated in my last blog, disabled people should not have to jump through this many hoops to exercise such an important right.