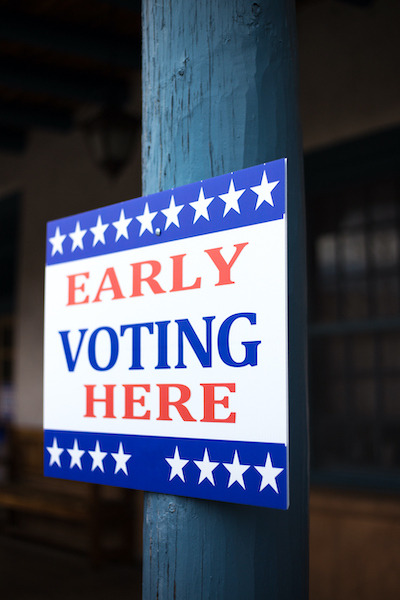 One of the biggest issues facing the electorate in the run-up to the November 3 General Election is the question of how to vote, and in particular, how to vote safely in light of the COVID-19 pandemic. Needless to say, this has spurred an enormous interest in alternatives to showing up at a polling place on Election Day. While many voters are deciding to vote-by-mail, it’s not for everyone.

This where early voting and in-person absentee voting come in. These voting methods provide alternatives that you may want to consider.

US Vote is excited to announce our new Early Voting Dates Chart that you can consult to see your state’s available options.

44 out of 50 states and the District of Columbia allow voters to use either early voting or in-person absentee voting or both of these options to cast a ballot. Both are great ways to have your vote counted while hopefully avoiding lines (and germs) at the polls.

Early voting is exactly what the name implies: the ability to cast a ballot before Election Day. This is usually done at a designated location, though not necessarily the polling place you’re used to using. Please check your local election office website for early voting locations. Look up your election office in the Election Official Directory.

With early voting, you must go to the designated early voting location to check in, get your ballot, go into the booth, fill it out, and hand it in to cast your vote.

In addition to using our Early Voting Dates Chart to check your state’s options, make sure to check the date range. A few states start early voting in September, but most won’t do so until sometime in October. The end dates are also quite variable, though most states will stop allowing either form of early voting in late October or during the first two days of November. Nebraska gives its voters a single day, October 5, to cast an early vote.

One more caveat: early voting and in-person absentee voting dates and locations are subject to change. So be sure to check in with the Early Voting, Election Dates and Deadlines, and State Lookup Tools before you head out to cast that early ballot.

And do it now, the clock is ticking.