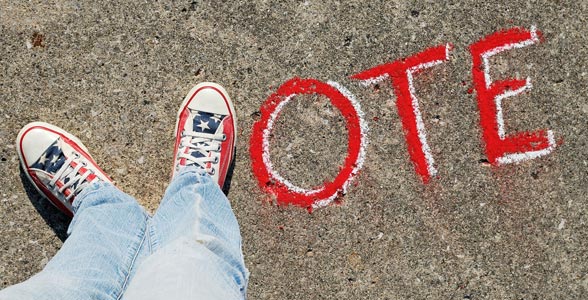 Rock The Vote recently launched a campaign aimed at inspiring young Americans to vote in the upcoming midterm elections. Called #TurnOutForWhat, the campaign is enlisting musicians and celebrities to show that voting is vital even when the White House is not at stake. Joining the cause in a video are Lil’ Wayne, Whoopi Goldberg, Lena Dunham, Natasha Lyonne, Sophia Bush, Ireland Baldwin, and Fred Armisen, among others.

According to Rock The Vote, that there are approximately 86 million American Millennials in the U.S. The Institute of Politics (IOP) at Harvard University defines Millennials as those aged between 18 and 29 years old, born between 1985 and 1996. This age cohort is reportedly far less politically engaged than its older predecessors of the General X and Baby Boomer generations. The survey conducted by the IOP and released in April 2014 found that only 23% of Millennials say they will “definitely be voting” in November’s midterm elections.

Rock The Vote is hoping to channel this frustration with Washington into action at the polls. Their four-pronged plan calls for engagement, involvement, voting, and spreading the word. Of course, US Vote is right on the front lines as well. Become engaged and involved by visiting our Website to find out how you can check election dates & deadlines, find your state voting requirements, and get assistance from our Voter Help Desk. US Vote is also here to help you register to vote, request an absentee ballot, and browse voting methods & options. Last, but not least, join us in spreading the word via Twitter and Facebook.