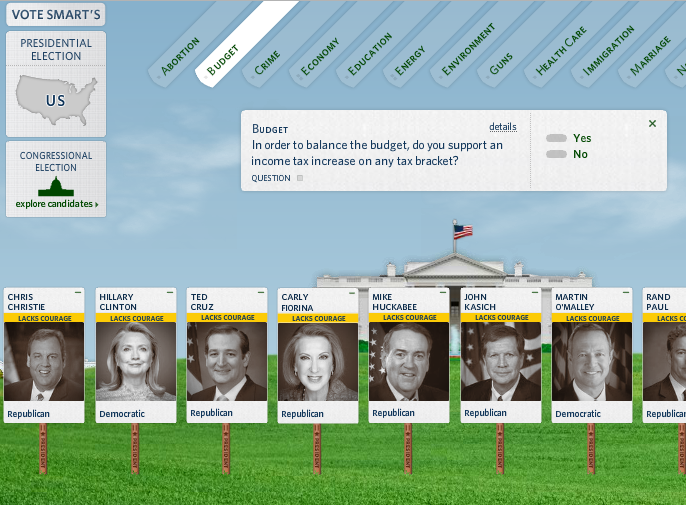 Earlier this year, we here at Vote Smart re-launched our award-winning voter-to-candidate matching tool, VoteEasy, to our website VoteSmart.org. Often times, voters are simply not exposed to their candidates’ true beliefs. Data such as voting records or interest group ratings are buried underneath webs of political rhetoric. Vote Smart, and particularly VoteEasy, exists to counter that rhetoric. This interactive tool gives voters nation-wide the opportunity to identify which candidates best align with their political beliefs.

As you answer questions on 13 national issues, you will watch Presidential candidates move closer or further away, depending on how closely the candidates’ political stances align with your own. If you question the accuracy of the candidate's positions, or would like more information on a displayed candidate, simply click on the candidate’s photo and get their factual record which includes their Political Courage Test answers, Key Votes, public statements, and more.

VoteEasy is powered by data from our Political Courage Test. With the goal of demanding transparency from candidates, it asks one central question: Are you willing to tell voters your position on major issues relevant to our Nation?

Unfortunately, the answer is typically “No”. Responses to our Political Courage Test have significantly reduced over the years. In the mid-1990s, the National response rate was an impressive 72%, but by 2014 it dropped to a worrisome 20%. Realizing that candidates were refusing the test due to advice given by their campaign managers, Richard Kimball, our President of the Board, decided to use the research we have spent decades collecting to determine candidates' likely responses to the Political Courage Test. These findings are presented in the form of VoteEasy. The Political Courage Department pulls direct quotes from candidates’ speeches to determine their stances on issues. We do this all as a courtesy to voters based on our commitment to transparency and voter education. It is this research that allows VoteEasy to function despite candidates’ unwillingness to publicize their political stances.

You can look forward to Congressional VoteEasy, set to be released by August 31st, 2016, which will allow voters to enter their zip code and compare their stances with gubernatorial and state legislative candidates. To supplement findings on VoteEasy, voter's can also explore our other web-based apps, such as iSPY and Political Galaxy, for additional data on both elected officials and candidates running for office.

To determine your political match, visit votesmart.org/voteeasy. For further information on Vote Smart or any of our services, contact us at [email protected] or call 406-859-VOTE (406-859-8683). Also, be sure to follow us on Twitter @VoteSmart and on Facebook at Facebook.com/ProjectVoteSmart.

Vote Smart (formerly known as Project Vote Smart), founded by Presidents Jimmy Carter and Gerald Ford, is powered by more than 8,000 students and volunteers of both major parties, third parties and independents. It is the nation's premier non-partisan, citizen-driven organization devoted to voter education.