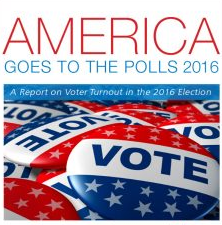 We do not have to accept low voter turnout as an inescapable reality of American politics. States across the nation – with voter-friendly policies and meaningful competition – are providing a blueprint for the nation on how to achieve voter turnout in the 70 to 75% range. That’s the key message of a new report, “America Goes to the Polls,” from Nonprofit VOTE and the U.S. Elections Project.

In the 2016 election cycle, voter turnout at 60.2% of the nation’s eligible voters, was the third highest for president since the voting age was lowered to 18 in 1971. Improvements in state voting procedures and tools like those of the U.S. Vote Foundation have led to higher voter registration and gradually better turnout, in spite of new voting restrictions in some states. Still, four of ten Americans didn’t vote - with turnout still far lower than most modern democracies. Many cited a registration issue or said their vote wouldn’t make a difference with the outcome, at least in their state, a foregone conclusion.

The two strongest factors in higher voting were whether or not a state offered Same Day Voter Registration and whether they were targeted by the major campaigns as a battleground state. The state turnout rankings are a prism to see the impact of election policies to increase or suppress voting.

Same Day Registration (SDR) gives voters the opportunity to register to vote or update their registration when voting early and on Election Day. Voter turnout in states with SDR was seven points higher than non-SDR states. As of the 2016 election cycle, 13 states and the District of Columbia offered Same Day Registration, seven of which were in the top 10 nationally for voter turnout. Additionally, three other states – California, Hawaii and Vermont - have enacted it for 2017 or later.

Other policies that aid citizens in voting or registering to vote, such as automatic voter registration and vote-by-mail, also show promise in increasing voter turnout.

Meanwhile, some states are making it harder to vote with Strict Voter ID laws. Wisconsin and Mississippi were two of the most recent states to implement a strict photo ID policy, requiring IDs many voters didn’t have.  Only four states saw voter turnout drop over 2012. Theirs was the largest.  Most surprising was Wisconsin. It was an intense battleground state for president and control of the U.S. Senate yet had its lowest turnout in 20 years.

In addition to removing the barriers to voter participation, it’s critical that citizens have a reason to vote. Unfortunately, competition for Congressional seats hit a historic low. Just 33 of 435 House seats were even close, the lowest since World War II. Three-quarters were won by landslide margins for 20 points or more. Partisan redistricting plays no small part. Today parties have the enhanced capacity to employ modern technology and rich voter, consumer and government databases to scientifically tailor the districts - all the easier to gerrymander as like-minded voters are increasingly choosing to live in near each other.

The lack of competition is compounded by the effects of the Electoral College in presidential election years, which puts decision-making in hands of a small number of battleground states. Once again campaigns devoted 95% of candidate visits and 99% of ad dollars to just 14 states, over half to Florida, North Carolina, Ohio and Pennsylvania.  As a consequence 147 million voters in the non-battleground states stood on the sidelines, left only to ratify the state’s pre-ordained outcome.

All of this, and more, is examined in the “America Goes to the Polls” report available for download at www.americagoestothepolls.org. The most compelling story of the state rankings is that voter turnout of 70% or more is achievable, as is proven year-after-year by the top-ranked states. They are our election laboratories, creating a path to higher voter participation and a stronger democracy. We need only follow their lead.