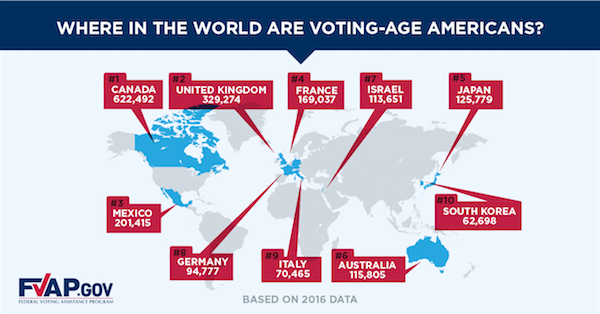 It's a tiny improvement over the 4% level last reported, which we also found quite disappointing.

The Federal Voting Assistance Program's (FVAP) most recent Overseas Citiizens Population Analysis (OCPA report) cites "obstacles" to the overseas voting process as the reason for this low participation - an opinion that Overseas Vote does not share with the agency.  Overseas voters have many streamlined processes, like the facility of receiving their ballots online, that make overseas voting easier than ever. And our research shows exceedingly high satisfaction rates from overseas voters who do participate. Rather than cast blame and make excuses for poor results, we think it would be better to start thinking out-of-the-box, team-up and do more effective outreach, or enable Overseas Vote to do so.

Were you one of the American voters who did not vote? Your vote was missed! Per the OCPA report, the “top 10” countries from which overseas voters are voting are Canada, UK, Mexico, France, Japan, Australia, Israel, Germany, Italy, and South Korea.

YOU are eligible to vote: if you are a US citizen, over 18 years on election day. Voting is based on where you last lived in the United States, or if born overseas where your parents last lived.

What determines if you are an “overseas” or “domestic” voter, and does it make a difference?  On your Absentee Ballot Request, if you check the box, “I am a US Citizen living outside the country, and my return is uncertain”, then you can vote only in federal races, which this year includes the U.S. House of Representatives and the U.S. Senate. If you are temporarily overseas and intend to return, you are eligible to vote in federal, state and local races.

Voting from overseas is very easy.  However, each state can actually have different ballot request deadlines. Make sure to check yours!  If you have a computer, you can fill out an Absentee Ballot Request form online - then download, print, sign, and return the form to your state according to the instructions that print with the form.

Ballots will begin to be emailed or mailed out 45 days before the election to voters who have already requested their ballots. Twenty-two states allow email return of ballots. I vote from Nevada. All I do is print ballot, fill it out, sign, scan, and email back with an authorization allowing email of ballot. I even receive a confirmation of receipt by my Election Office.

Our organization, however, recommends that voted ballots be transmitted by post - for the obvious security reasons. All states allow and support returning ballots by mail. Make time to take your completed ballot to the post office to get the proper postage and have the envelope postmarked to indicate the date the ballot was posted. Only military ballots are postage paid - and very often ballot envelopes are nonstandard size, so the post office is your best bet. Return your ballot as fast as possible to make sure it gets back in time.

If convenient, your closest US Embassy or Consulate has an “Embassy mail bag to the States”; however, usually you have to make an appointment to enter these facilities and there may be special requirements and time limits. They may also have postage requirements.

What happens if you don’t receive your ballot?  There is an answer. Overseas citizens have an emergency ballot option: the Federal Write-in Ballot (FWAB) The FWAB is an alternative ballot for overseas and uniformed services voters whose ballots are late. If you have questions, the Overseas Vote Help Desk will be happy to answer any of your questions.

Never Resided in the States?  The following states allow U.S. citizens who are 18 years or older and were born abroad, but have never resided in the United States to be eligible to vote absentee:

A wonderful program to honor the men and women who fight for the freedom of all Americans and citizens around the world.  Once you fill out your state’s form, they might send you a printable certificate, bumper sticker and/or lapel pin.  New states are being added.

By voting, you can HIRE or FIRE elected officials that pass laws that impact Americans around the world.  The choice is yours, shall you speak up or allow others to speak for you?