Guest Blog from US Vote's Outreach Volunteer in Israel 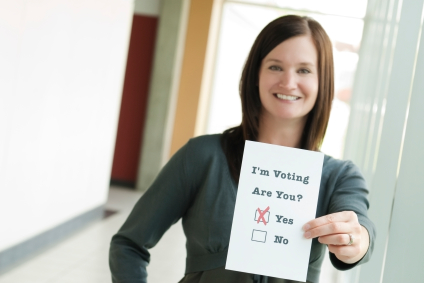 Absentee Voting Information for U.S. Citizens Abroad
Voting is one of our most fundamental rights as U.S. citizens. According to the U.S. State Department, in 2014, an estimated 8.7 million U.S. citizens lived overseas. (Source document: U.S. State Dept) And USA today wrote, “As many as 30,000 of the 300,000 U.S. Citizens living in Israel voted in previous presidential elections." (Source Article: USA Today, 10/31/2012)

If you are a US citizen 18 years or older and reside outside the United States, you may vote absentee in the 2016 U.S. Primaries and General Election. Registration requirements vary by state. The best time to register to vote/request an absentee ballot is January of each year, or at least 90 days before Election Day. Depending on the state, some will allow you to register while 17 years old if you are 18 by the election, others require that you are 18 when you register.

Citizens residing outside the U.S. may not arbitrarily choose which State to declare as their legal voting residence. Your "legal state of residence" for voting purposes is the address where you last resided immediately prior to your departure from the U.S., not where you last voted. This residence remains valid even though you may no longer own property, or have other ties to your last State residence, and your intent to return to that State may be uncertain.

Never resided in the U.S.? As of this writing, 37 states* allow U.S. citizens, 18 years or older, who were born abroad, but have never resided in the United States to be eligible to vote absentee. Voting address in the United States will be the last U.S. residence of a U.S. citizen parent. States vary in their voter registration identification requirements, however, most commonly you can use either: 1) the last 4 digits of your Social Security Number (SSN); or 2) a valid state driver's license.

If you are in Israel, and have any questions, AACI member, Andee Goldman, will be happy to help. You can reach Andee at [email protected].

Since 2008, Andee Goldman, has helped many Americans living in Israel to vote. She is an active volunteer for U.S. Vote Foundation's Overseas Vote initiative. U.S. Vote Foundation is a 501(c)(3) nonprofit, nonpartisan public charity incorporated in Delaware. Overseas Vote’s mission is to give voters the ability to generate accurate and complete state-specific voter registration, and state-specific absentee ballot request applications across all states with instructions and local election office addresses, in addition to providing comprehensive voter information tools.

“Voting from abroad is a privilege.  By not voting, you allow others to speak for you.”  Andee Goldman

And here is one of Andee's favorite quotes: "There’s a tendency to think ‘My vote doesn’t matter. Who I vote for doesn’t matter.’ But we’ve seen, time and again, that elections have consequences and races, particularly in the Senate, can come down to a few votes. These outcomes determine who controls Congress, the Executive Branch, and appoints Justices to the Supreme Court, all of which can have an enormous impact on the lives of Americans at home and abroad. I encourage all Americans, including expats, to exercise their right to vote,” said Rep. Joe Heck (NV-3), who is running for U.S. Senate in Nevada in 2016. (Source: Facebook Post from Mark Ciavola, Campaign Manager, Heck Campaign)